Mark 12:38-44 32nd Sunday in Ordinary Time Truly I say to you, this poor widow put in more than all the contributors to the treasury; for they all put in out of their surplus, but she, out of her poverty, put in all she owned, all she had to live on 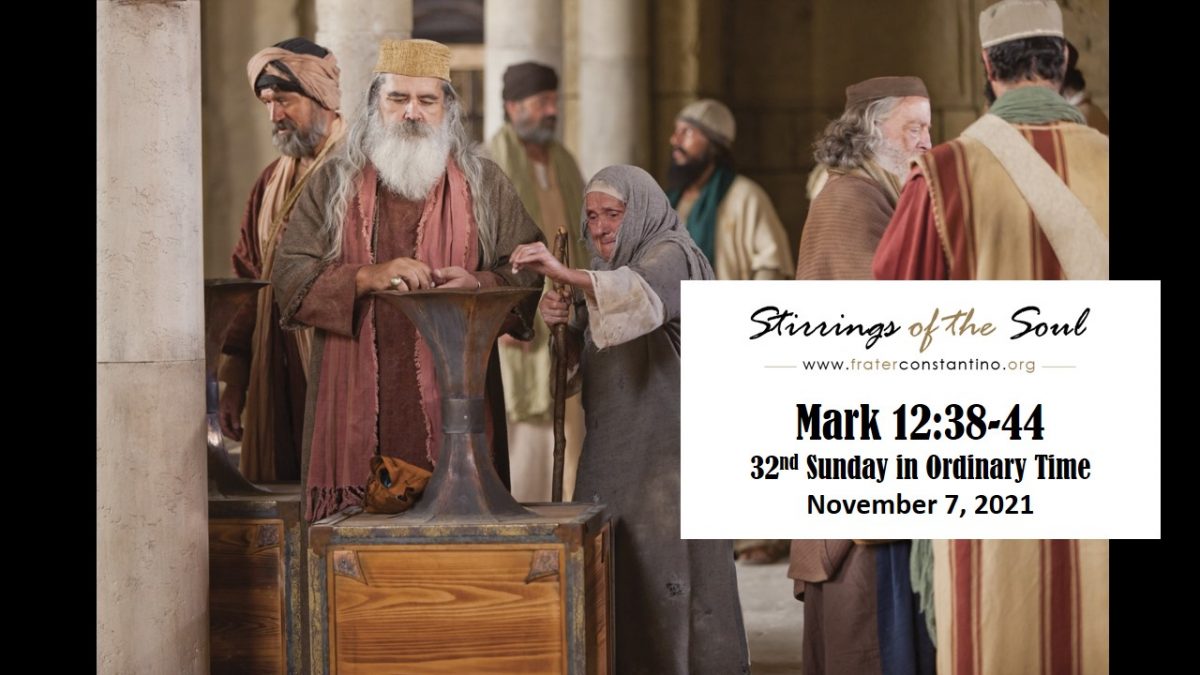 A. Text/Context
• We have just heard from the gospel 2 contrasting values: the pride of the scribes who love to wear long robes in public, who loves to take seats of honor in churches or banquets
• And in contrast to the display of pride by the scribes is the humility of a widow who only possessed 2 coins her only possession in life and she gave everything to the temple
• And while Jesus told his disciples that the scribes who are very proud will receive a very severe condemnation
• At the same time he praised the widow for her charity as she gives everything to the temple
• There is a relationship between the scribes and the widow in the gospel
• The scribes are temple authorities who are obliged by duty to distribute the money collected in the temple to the poor in society and that includes the widows
• During the time of Jesus the temple authorities are already very negligent in their duties and they have become so corrupted by money
• Instead of distributing the temple collection to the poor they spend it for their own ostentatious and luxurious lifestyle, leaving the orphans, and the widows without any help as they suffer the painful pangs of hunger because of poverty
• That is why Jesus condemned the scribes because they were not doing their duties assigned to them as temple authorities
• In the culture of the Jews it is terrible for a woman to lose her husband, or it is terrible if she does not have a son because the social rights are only for the male members of the family
• A woman cannot inherit a property and a terrible life awaits her if her husband dies and the children are still small, they will become poor automatically
• They will be taken care of by the religious authorities and this is now the problem, because the authorities are not doing their duties to help them as mandated by the Jewish law

B. Human Situation
• If we analyze the message of the gospel we can say that there is an existence of suffering because somebody is not doing his or her obligation
• So this is already a clear indication that in the performance of our duties it has its own social consequences on other people
• If parents for example are negligent in doing their responsibilities to their children like feeding them, clothing them, sending them to school they are guilty by virtue of the moral obligations that they do not perform as it is a moral obligation to raise our own children
• Young couple for example who are so overcome with passion who go beyond the safe limits of a relationship and yet they are not ready to get married and now they find themselves faced with the duty of having a child
• The girl will soon bear the child and the boy will run away leaving the girl alone in raising the child
• Both the boy and the girl cannot be forced to marry if they will say that they do not love each other
• They will not be guilty if they chose not to get married because they really cannot enter the marital sacrament if they will say that they do not love each other
• The church considers that out of human weakness. Love must be present
• But the father of the child will be guilty if he abandons his child leaving the woman alone in her obligations of raising the child. The man will be haunted by his conscience forever for the neglect of such a very important duty
• Or the other way around can also happen, if the woman will abandon her child to the care of other people. She will be haunted by her conscience forever because of negligence
• There are social consequences if we do not perform our duties well as defined by the norms or standards of our society
• Kahit saan man tayo naroroon, kahit sa pulitika, sa opisina ng gobyerno o sa pribadong kumpanya sa mga simpleng trabaho nakapataw sa atin ang mga responsibilidad na dapat nating gawin para maging maayos ang ating serbisyo
• We may not be perfect as parents as a father or a mother to our children but if we did our best to our children, God will not be pointing an accusing finger on us
• We may not be perfect in running the affairs of government or private companies or even in small organizations but if we did our best there will be no condemnation in the end
• Even in the performance of very simple duties it has its own social consequences
• Kahit ikaw lang ay na-assigned na tagahawak ng susi at araw-araw ay ikaw ang nagbubukas at nagsasara ng pintuan kapag hindi mo yan magawa ay magkakagulo ang buong opisina
• Kung sa mga maliliit na obligasyon ay may marami na ang mga consequences, papaano na kaya kung ikaw ay napiling opisyal sa buong komunidad at hindi mo nagawa ang yong mga obligasyon?
• We will be burdened with the guilt of conscience dahil mas malaki ang sira na mangyayari kung hindi natin nagawa ang ating obligasyon
• That is why if God has given us more. God also expects to share more to others

C. Challenge
• My brothers and sisters, today we are reminded that we need to fulfill our duties and obligations faithfully and religiously
• Ang ibig sabihin, hindi lang eksakto na nagawa na natin ang ating mga trabaho ng tama kundi nagawa pa natin ang ating mga tungkulin na may pagmamahal
• And those who love their work they will find prosperity
• We do more than the compliance that is required if we do it with love
• Just like the widow who gave all her treasure I am very sure that God will supplement all our shortcomings
• The woman of Zarephath in the first reading only has bread enough for 2 but she gave it to Elijah who was hungry
• And throughout the year of famine the woman and her son never went hungry because the jar of flour never became empty
• Let us not be selfish as God in his generosity will assist us if we are charitable o others
• Let us not be selfish by doing our work faithfully because the fulfillment of our duties and obligations is already an act of charity itself