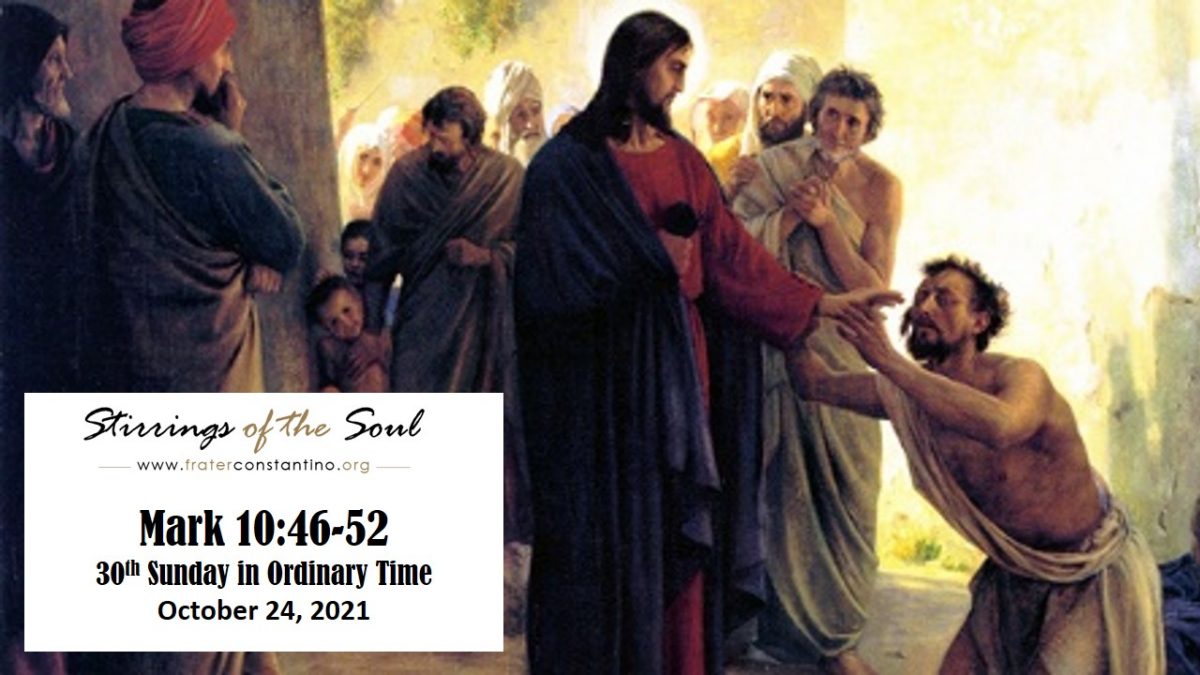 A. Text and Context
• The gospel today tells us of the story of a blind man which the scholars have identified as Bartimaeus
• Upon hearing that Jesus of Nazareth is entering Jericho and of course because Jesus is mobbed and followed by a thick crowd of people wherever he goes
• Bartimaeus shouted Son of David have pity on me to get the attention of Jesus and the people rebuked him telling him to be silent because he is creating a lot of noise
• Jesus asked him what he would do to him and the man replied: I want to see
• Jesus said go your way; your faith has saved you, and thereon he was healed of his blindness and followed him on the way
• There are implications to the people now that Jesus performs another awesome miracle in the gospel today by restoring the sight of the blind man who called him as the Son of David
• Jesus performs once more another healing miracle where he accepted the title as the Son of David
• We all know that David is a king and the prophets have foretold that the Messiah who will arrive in Israel will come from the line of King David or the root of Jesse
• This would mean that Bartimaeus knows Jesus by faith in his heart as Jesus is now the king who has already arrived
• And Jesus did not react to the words of Bartimaeus unlike other episodes of healing wherein the one who is healed is warned not to tell the people who he is
• An indication that Jesus is now slowly revealing himself to the people who he is and that the title as the Son of David is a royal title because of his royal inheritance from King David

B. Human Situation
• Let us dig a little deeper into the spiritual life of the blind man Bartimaeus
• First it was not his intention to go near Jesus because at that time of Jesus’ arrival he was on the roadside begging
• He was just informed by the people that Jesus of Nazareth is passing by while on his way to Jericho
• The other people around know Jesus simply as the man living in Nazareth
• But look at Bartimaeus, he said: Jesus, Son of David have pity on me. How did Bartimaeus know that Jesus is the Son of David?
• Apparently the blind man is a very spiritual person silently following the teachings of the prophets prophesied hundreds of years back that a shoot shall spring from the root of David to become a king and the Messiah of Israel
• Perhaps even in his blindness he has the tutelage of the teachings of the scriptures because he knows that Jesus is the son of David who is a king and he is now passing by and he now has the opportunity
• If Bartimaeus who is infirmed by his physical blindness to see who Jesus is then let us think if sometimes as Christians or as lay people equipped with all the faculties of the senses are worse than the blindness of Bartimaeus
• And here comes Bartimaeus who acknowledged Jesus as a king and asked favor from the Lord whom he hoped to restore his sight from his blindness that he will be allowed to see. Blind as he is, he sees Jesus as a king who serves the needs of a blind man
• And this is what St. Mark our evangelist today wishes to convey to us in his message that the kingship of Jesus is not a kingship to be served upon by the subjects but a leadership or a kingship who serves his subjects
• A beautiful lesson today that power can really blind us all if we are only motivated to be served

C. Challenge
• The blindness that we are talking now is no longer the blindness of sight but the blindness of the heart already darkened by the sin of indifference if our only motive for power is that we want everybody to bow before us and we no longer use power to find all the means in order to serve humanity better
• When we fail to become charitable to the needs of others, when we become apathetic to the needs of others
• That would mean that the sin of indifference has already enveloped the eyes of our hearts. Darkness has already clouded us
• Bartimaeus has become a recipient of the mercy of God, because deep in his heart he is able to see God
• We in turn shall become the recipients of God’s many and manifold graces and mercy if we perform the duties required as Christians
• If we perform our obligations of charity, God will glorify us. In the 2nd reading in Hebrews, it was not Jesus who glorified his own self as a high priest but it was God himself
• The message of the gospel is that power can lead us to blindness but through the example of the healing of Bartimaeus, power is also a driving factor in order to serve others better
• Bartimaeus is always hoping that someday God will give him the power to see
• And God did not fail him when he encountered God; he was able to see and what happened afterwards? Bartimaeus followed him
• God will give us the power to make the little good works that we do to flourish to a greater degree
• The great charitable institutions or the popular service oriented public or private agencies did not really flourish because of the efforts of human beings. It is God that caused them to flourish
• From the small efforts that we start, God will cause them to prosper
• Everything is remembered by God and they will all be for your own merits
• With the eyes of faith like the blind man Bartimaeus and the little power that we have in our hands God will perform many miracles by allowing our small efforts in our work to prosper in service