Matthew 2:1-12 Solemnity of the Epiphany of the Lord January 8, 2023 The Magi were overjoyed at seeing the star, and on entering the house, they saw the child with Mary his mother. They prostrated themselves and did him homage. Then they opened their treasures and offered him gifts of gold, frankincense, and myrrh.

Luke 2:16-21 Solemnity of Mary, Mother of God January 1, 2023 Mary kept all these things, reflecting on them in her heart 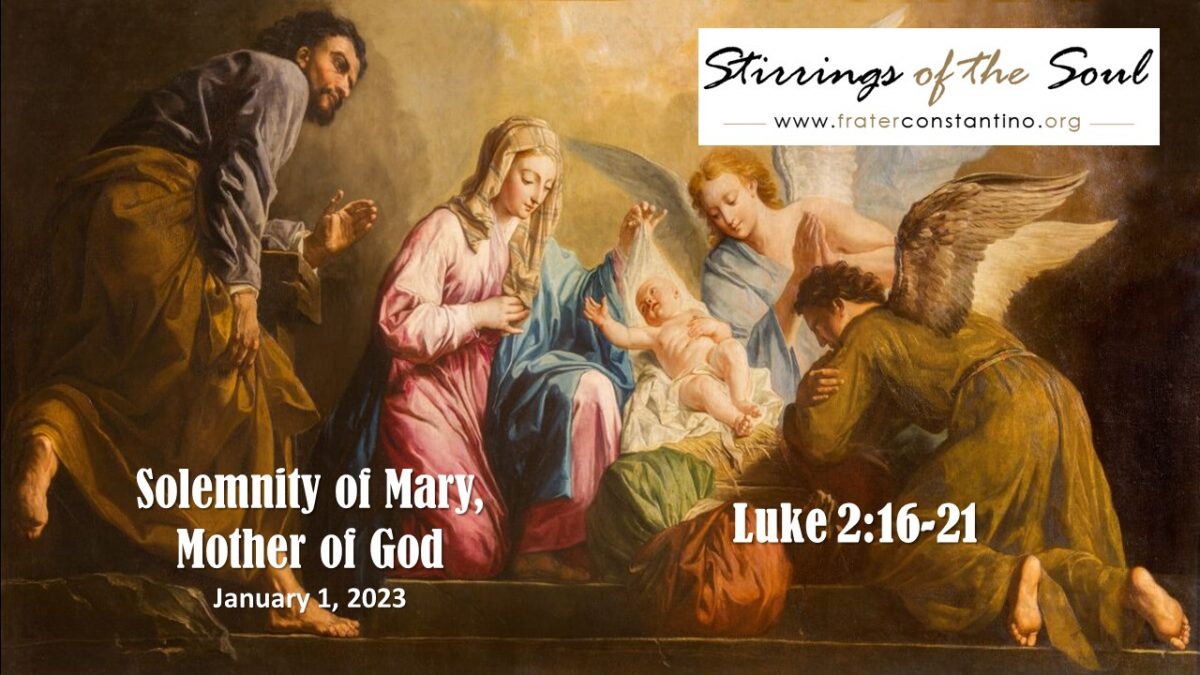 A. Text/Context
• Since the early existence of the Church Mary has long been revered as the Mother of God, but it was in the Council of Ephesus in the year 434 that Mary is already declared as the Theotokos which means the Mother of God in the Greek language
• Memorable man gud kaayo ang Ephesus kay mao man kini ang lugar diin nagpuyo si Maria nga giamumahan ni San Juan Ebanghelista hangtud sa iyang pagkamatay
• Ephesus is now part of modern Turkey and the house of Mary is still there visited by Christian pilgrims including Muslims
• While the disciples were together with Jesus in his ministry, Mary also has been in constant company with them even acting as their spiritual adviser according to the writings, of course in a very discreet manner
• The church took great care and prudence in the approval of the writings about Mary because Mary herself in all her humility would not be happy of people giving her so much praise and honor. She does not like that idea
• Apart from that, this is also to avoid fanaticism when some people would already adore and worship Mary like a goddess. Always remember this: we honor and venerate Mary
• Mary would always recommend: Listen to my son, go back to my son, learn from my son, believe in my son, etc.
• Mary played the role of the Mother of God since the day of the annunciation until her last breath in Ephesus when she died
• Mary has grown in her spirituality into a full bloom of spiritual perfection
• And so, the shepherds came to visit the little infant in Bethlehem, they found him lying in a manger and wrapped in swaddling clothes lying in a straw. And we can only imagine the lowliness and the humility of the situation
• There could have been instant miracles of conversion that occurred just at the very sight of seeing the beauty of the child lying in a manger, so adorable, and so beautiful
• Kon kita makakita bisan pisik lang sa langitnong panan-awon, dili na gud kana na to ikambyo sa bisan unsang butang pa ning kalibutana
• Mao kana ang nasinati sa mga magbalantay sa karnero. And how many of these angels? All the heavens were filled with angels singing Gloria in excelsis Deo. Mao kana ang panan-awon nga ilang nasinati
• The shepherds talk of so many things about the message of the angel to them. And what was the reaction of Mary? The gospel says that Mary kept all these things, reflecting on them in her heart
• Mary kept these things in her heart in silent reflection and meditation and she begins to understand everything as the years go by
• In other words, just like us, Mary in the beginning did not actually fully understand the mysteries revealed to her by God. If everything was understood, then, Mary is not a human being, but Mary, as she grows in age and wisdom she begins to understand all
• Mary begins to understand also that all the pains and sufferings that his Son will undergo she will also experience
• And indeed, the same degree of pain and suffering as prophesied by the prophet Simeon that: A sword shall pierce your heart
• And what was the first pain and sacrifice that the child Jesus undergo? It is also mentioned in the gospel: the pain of circumcision
• According to the scholars the first shoots of blood that come out from Jesus is during the rite of circumcision when he is only 8 days old sa linghod pa kaayo nga edad
• Joseph and Mary has to fulfill the obligation of the law and we can just imagine a child being wounded without any anesthesia that we know today! This is painfully horrible for a baby
• And according to the writings as the infant writhes in pain Mary cried in torrents of tears as the rabbis performed the ritual
• This was the first bloody sacrifice of the Lord equally felt by Mary through the pains in her heart

B. Human Situation
• How Mary was able to understand the mysteries of God, the mysteries about her son and the mysteries about herself is where we will situate ourselves as Christians
• Just like Mary who was once an ordinary human being she was able to hurdle and she fully understood the will of God for her, we too must be able to discern what God wants us in our life
• What are we going to do then? In the 1st reading it says: so, shall they invoke my name upon the Israelites, and I will bless them. Blessings arrive if we invoke the name of the Lord
• St. Paul said to the Galatians that we are the children of God and God is the head of the family
• Let us invoke the name of God in our prayers and let us reflect and meditate what is happening all around us as a family
• Nganong samok man ang akong kinabuhi; nganong wa na man koy trabaho; nganong molikay man ang ubang tawo nako; nganong nawagtang naman ang akong hinaguan; nganong nagkasakit na ko, etc.
• All the problems that we have could really be answered in prayer, reflection, meditation. Prayer must never stop. Mao diay nagkasakit ko, kay kon wa pa, taas gyud gihapon kaayo ang akong garbo
• Mao diay nawad-an ko ug trabaho kay mas taas pa ang offer sa ubang kumpanya
• All these things, the light of the HS will guide you in order to make very important decisions in your life
• If we are subservient to the promptings of the Spirit we will be able to accept all the things that happen in our lives
• We will never blame others for our misery. And we don’t even have to fight back to those whom we blame because God will make us understand why we are in the midst of all this wretchedness
• What is the key to happiness? The key to happiness is to accept the truth and to accept the reality
• If you resist about the truths and the realities of your own life you will really be mad because you will always look to others why I am not like them
• The reason why we are angry is because we have not accepted the reality of the situation
• Look at Mary and Joseph. They did not curse God for giving them such a terrible problem in their relationship. They did not curse their neighbors and blame them for the loss of Jesus
• Did Mary and Joseph feel insulted that in their greatest moment of need they feel abandoned by God
• Mag reklamo gyud unta si San Jose, ngano gud intawon nga ang Diosnong bata anhi pa matawo sa kuwadra sa kabayo maghigda pa gyud sa kumpay
• Mary and Joseph did not complain because they understand that God has a purpose for this tungod sa ilang mga pamalandong
• God wants to show to the world that even the most powerful being in the universe, the Son of God can live in humility and lowliness
• God wants to show to us that it is still possible to bow down our heads even if we are already millionaires
• God wants to impart to us that there are no boundaries that are so formidable when love reigns in our hearts
• God loves to reveal his little mysteries to people who have been faithful to him, to those who are humble and lowly, to those who continuously pray and meditate what God wants in us in this world
• If we are already aware that this is what God wants for us then it will be easier to handle problems
• While Mary feels the joy of giving birth to the son of God, at the same time she also feels the pain of the first bloody sacrifice of the circumcision
• While Mary feels the terrible sorrow of the crucifixion she has also witnessed the fullness of joy in the glory of the resurrection of his son
• Life has 2 facets: sadness and sorrow, joy and happiness. If you will not reflect what is the cause of your downfall today, you will only curse God in the end. If you will not reflect why your life is so abundant and plentiful today, you will also forget God later on
• Mary has discovered the meaning of the sad and happy episodes of her life because she meditated and prayed on them

C. Challenge
• This is the challenge of the celebration of the solemnity of Mary the Mother of God
• That like Mary who kept the secrets in her heart and continuesly pray and meditate about the mysteries of God, she was rewarded with the benefit of the wisdom of God and she understood everything
• We too can decipher the meaning of the things happening to us if we look at the Holy Mother as our model
• Let us start the New Year by looking at Mary as the finest model who was able to fathom the mysteries and wisdom of God because of her prayers