Luke 14:25-33 23rd Sunday in Ordinary Time September 4, 2022 If anyone comes to me without hating his father and mother, wife and children, brothers and sisters, and even his own life, he cannot be my disciple.

Luke 16:1-13 25th Sunday in Ordinary Time September 18, 2022 No servant can serve two masters. He will either hate one and love the other, or be devoted to one and despise the other. You cannot serve both God and mammon.

Luke 15:1-3, 11-32 24th Sunday Ordinary Time September 11, 2022 “Father, I have sinned against heaven and against you. I no longer deserve to be called your son; treat me as you would treat one of your hired workers.” 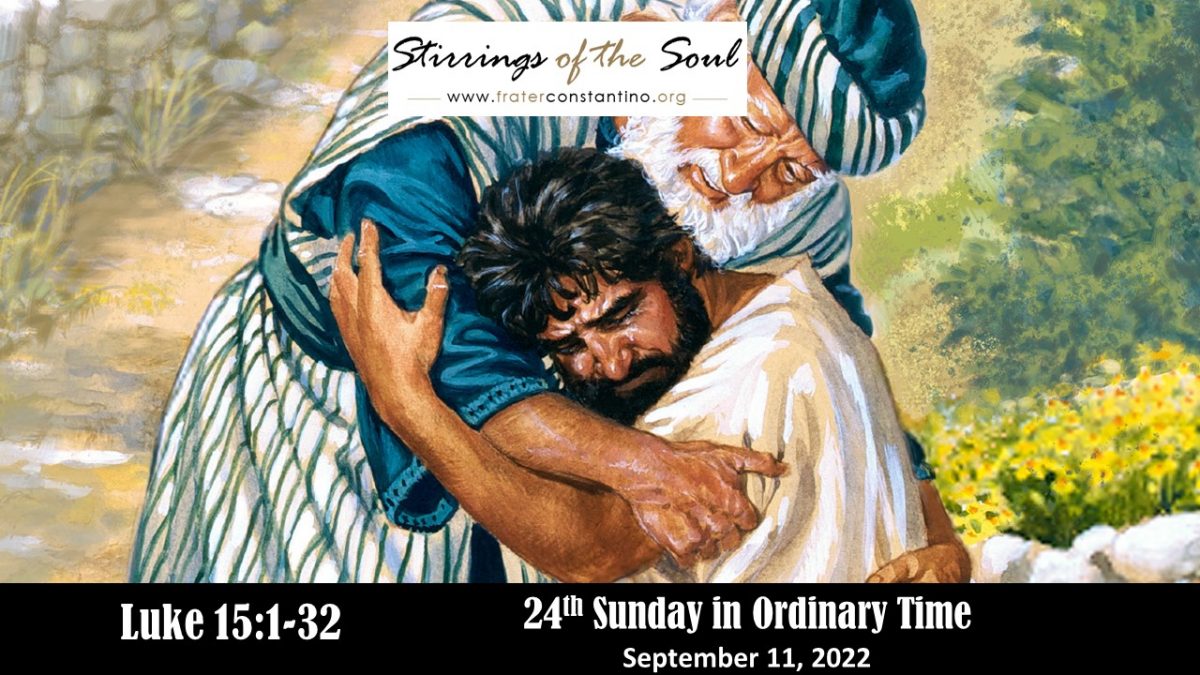 A. Text/Context
• So as the story goes, the younger son took the share of his inheritance from his father, went to a far place, lived like a millionaire for a time and squandered all his money for all the pleasures of the world that money can buy
• And at the last moment, hungry and penniless, wretched and destitute, he finally came to his senses. And what was on his mind? He was thinking of what to say when he goes back to his father. Let’s take a look at his script of his prepared dialogue
• Father, I have sinned against heaven and against you, I no longer deserve to be called your son; treat me as you treat one of your hired workers. So he got up and went to back to his father memorizing the lines that he will say to his father when they meet
• And exactly the same words he said when his father embraced him, but he was not able to finish it because he already felt the welcome and the warmth of his father’s embrace. He was not able to say anymore to treat him as a servant. His father even ignored his words of being unworthy to be called a son again
• Instead, he was made to wear the finest robe and the father has thrown a big welcome party for his son
• Now the elder son felt very jealous and the father said: My son, all I have is yours, but we must celebrate because your brother was dead and has come to life again; he was lost and has been found

B. Human Situation
• Obviously, the younger son displayed a very blatant role of a sinner in the story. Although it is a right for a son to inherit a property, but this is an insult in this case when the father is still very much alive and he wanted to get his share already
• It is common knowledge that inheritance is divided only following the death of the owner of the estate even in our own culture
• It breaks the heart of the father to do it, but because of his goodness, he respects the rights of his son, he just divided the property for the two of them
• Then the younger son squandered the money with prostitutes, indicating our human weakness to succumb to the pleasures of the flesh, especially the unbridled pleasures of the flesh at the expense of our dignity as children of God
• And with all the money gone, the younger son now finds himself in company with the pigs and even with food eaten by pigs, nobody would give him. Hungry and penniless, he now feels the pains of being alone
• Then came the final blow, the younger son was not only dirt poor but was already in a terrible state of destitution
• The son had virtually nothing left anymore of himself not even his dignity
• The gravity or the intensity of our sins could send us to the lowest ebb of our lives, and the act of going back to his father to ask for forgiveness paved the way towards a total reconciliation
• The parable of the prodigal son is such a beautiful story about human weakness and the virtue of humility through the acceptance of our sinfulness as human beings
• There is no more problem now with the father and younger son relationship, since they have already reconciled
• The problem is the older son who cannot accept the return of his younger brother. He just cannot accept the fact that one day he disappears, and another day he comes back and he’s got the nerve to enjoy once more the comforts of home as if nothing happened?
• The older brother thinks this is unfair. He cannot join the party on the joy of his return
• Incidentally, the refusal of the older son to accept the return of his brother also breaks the heart of his father who only aspires to see his children complete with nobody lost and gone astray
• What is the problem with the older son? Here we see a less obvious and subtle kind of sin we can hardly notice. There is no real acknowledgement on the part of the older son that he is the son of his father
• He said that all these years I have served you and not once did I disobey your orders. What does it mean? He works like a slave. He treated himself like a slave not like a son! He never disobeyed, so he follows with blind obedience. His obedience is simply for compliance; his work is not a labor of love
• I have heard parents say that even though their sons and daughters are very naughty, pero dahil masyadong malambing, very expressive sa kanilang paglalambing ay napapawi na ang galit ng mga magulang
• That is intimacy. Definitely, that is what God wants from us that is why we need to ask what we need. The older son never asked anything from his father. He has a very cold relationship walang kalambing-lambing
• Anyway, in the long run, the older and the younger sons are both prodigal in character. Their only difference is distance. The younger son committed a sin because he ran away far from home rejecting the love his father
• The older son committed a sin because even though he is very near, it is almost useless, he feels cold to the burning love of his father and he feels even colder in accepting the return of his brother
• In our lives as Christians, we can be one of the sons. Sometimes we forget good relationships; we neglect family and friends, in search of our own selfish ends for the sake of personal pleasure

C. Challenge
• The message of the gospel is very clear. God shows his unending love towards a repentant sinner. God shows his concern to someone who is lost. God shows his concern to accept once more a sinner who comes back
• And God is reminding us what should be our right attitude before God in showing repentance; that we recognize our sinfulness and that we humble ourselves before God as exemplified by the younger son
• God reminds us of our right attitude towards repentant sinners, that we accept them back, that we work towards reconciliation as we must oppose the selfish attitude of the older son
• In the first reading in Exodus Moses was able to bargain from the Lord of the punishment that awaits them. The bargaining power is really the love of the father to his son
• In the second reading in Timothy Paul admits that he was once a blasphemer and a persecutor but the mercy of God saves him
• The summary of the message is that repentance, forgiveness, reconciliation is a celebration of a homecoming and renewal with God. It is a celebration of a joyful reunion with God and he calls us to do the same
• And lest we forget, if we repent, if we forgive, if we reconcile, nothing is lost, the justice of God remains
• What are the words of the Father to the older son: My son, all I have is yours, but we must celebrate because your brother was dead and has come to life again; he was lost and has been found
• The younger son has already taken his inheritance and so what remains belong to the older son, but what matters is really love
• We are made to reflect once more that love has a higher value than justice