Luke 13:22-30 21st Sunday in Ordinary Time August 21, 2022 Strive to enter through the narrow gate, for many, I tell you, will attempt to enter but will not be strong enough. 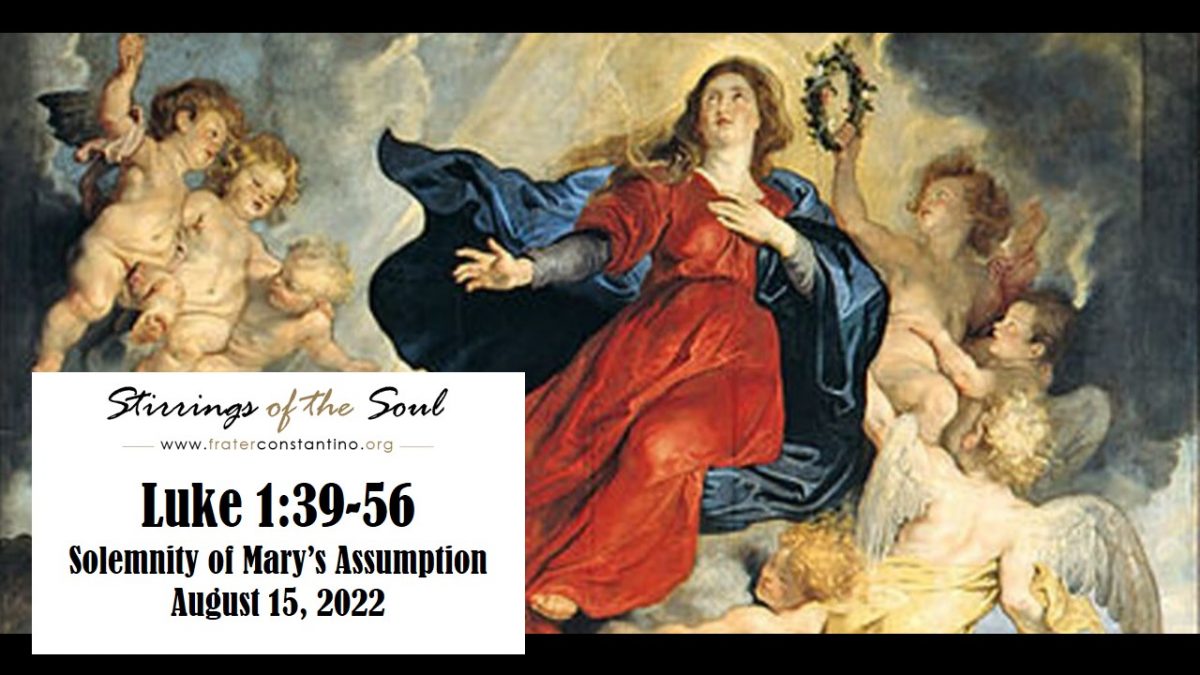 A. Text and Context
• Today, the gospel tells us of the woman Mary, the Nuestra Señora de la Asuncion or the Lady of the Assumption
• There is no detail in the whole book of the bible that says of the Assumption of Mary into heaven
• That is why in today’s feast we will not talk of quotations or lines or passages from the bible that tells of this feast
• There are 3 sources from the Catholic faith where doctrines and dogmas of the Church are derived from: the bible or the scriptures, the traditions and the Church, and the last one is the Magisterium or the teachings of the Church
• Today we talk a lot about the traditions in the Church that speaks of the Assumption of Mary into heaven
• Just remember this, where the bible is so silent, the Catholic traditions overflow with answers
• In the Franciscan tradition, the Franciscans pray the Franciscan rosary known as the 7 joys of Mary or the Franciscan Crown. It is the 7 decades of Hail Mary’s
• At the end of the rosary we recite 2 extra Hail Mary’s to commemorate the 72 years of life that Mary spent in this world
• Tradition says that Mary died and was buried in Ephesus (now modern Turkey) and it was St. John the Evangelist who took care of her until she died
• This is the same John who was still a very young teenager when Jesus was crucified on the cross whom Jesus said: Mother behold thy Son, Son, behold thy Mother
• Tradition says that the apostles visited Mary’s tomb but the body was no longer there, only flowers remained at the tomb and they heard the voice of the angels singing
• Devotions developed and in fact because of the belief that Mary ascended into heaven body and soul the original name of the feast is the Feast of the Dormition of Mary or the Sleeping of Mary
• From the Spanish root word dormir which means to sleep. The belief that Mary simply slept and did not really die until the time that she is assumed into heaven by God himself
• At the same time theology also developed that Mary as the Mother of God cannot be corrupted body and soul otherwise Jesus who took the flesh and blood from his very human mother cannot be preserved from corruption if his mother who died will simply turn to ashes forever
• It cannot happen that the body of Mary will decay because Jesus resurrected body and soul and ascended into heaven body and soul. Jesus is free from the corruption of death
• You see if Jesus is free from sin then God has also made Mary as the Immaculate Conception
• If Jesus resurrected from death and freed from decay and corruption then God has also made Mary whole and entire and assumed her into heaven
• And so God himself has saved Mary from corruption by saying yes to become the Mother of God
• So we now understand that Mary is really assumed into heaven body and soul because it is a consequence of Jesus who is free from bodily corruption because Jesus resurrected from death
• And so to concretize the faith in the tradition that has been practiced since the 6th century
• On November 1, 1950 Pope Pius XII declared the Assumption of Mary as a dogma of the Church
• When it is a dogma, all Catholics must believe, if not we will be called heretics
• Going back to the pages in history, almost a hundred years before in the year 1854 the dogma of the Immaculate Conception was also declared
• This is a precursor of the dogma of the assumption
• There is a connection between the two. If a body is immaculate automatically it is saved from corruption and so the dogma of the Immaculate Conception was declared and the dogma of the Assumption followed a hundred years after
• The Assumption of Mary is very sound and healthy in its theological aspect because Mariology is basically Christology

B. Human Situation
• Now we ask the question what then is the significance of Mary’s assumption into heaven in our life as religious?
• Very big significance. One of them is our effort to become holy and to be able to find out what does really God wants us to do
• When Mary accepted the responsibility of becoming the mother of God she doesn’t actually know what is really in store ahead of her
• Only to find out later that a sword shall pierce her heart as he was told by Simeon
• Only to be told by Jesus why are you looking for me I am supposed to be in the house of my Father
• I personally believe that Mary did not understand everything from the very beginning but because she constantly ponders and reflects she understood everything
• In our lives as Catholics, it would just be very easy for us to dismiss devotions to the BVM as something unnecessary because we already believed in Jesus as our Lord
• What else would I say to priests and religious who do not honor Mary? It would be very easy for Satan to enter their lives
• Why because in many representations of the Blessed Mother especially in the statues, she crushes the head of the serpent
• Mary is ordained by God to defeat Satan as Genesis would put it that a woman shall crush your head
• Those who do not have devotions to Mary will not have the privilege of the power of the woman who will crush the head of the serpent
• There would be no woman clothed with the sun who would enlighten the darkness of the brilliance of the theology that they believed
• That is the presence of Mary in the Scriptures from Genesis to Revelation
• Sad to say today … some priests are even angered by the Marian devotions of the faithful
• Priests, religious, and lay people who do not believe in the Virgin Mary succumbed to the desires of this world

C. Challenge
• So today we are challenged to climb to the greater heights of spirituality to reach the pinnacle, the epitome, the zenith, or the utopia of our Catholic faith
• And the ladder that we use in the climb is humility to ask for the intercessions of the Mother of God that she will accompany us throughout our difficult journey because she is given the power to crush the enemy and we will be victorious in the end