Luke 12:32-48 19th Sunday in Ordinary Time August 6, 2022 Blessed are those servants whom the master finds vigilant on his arrival. 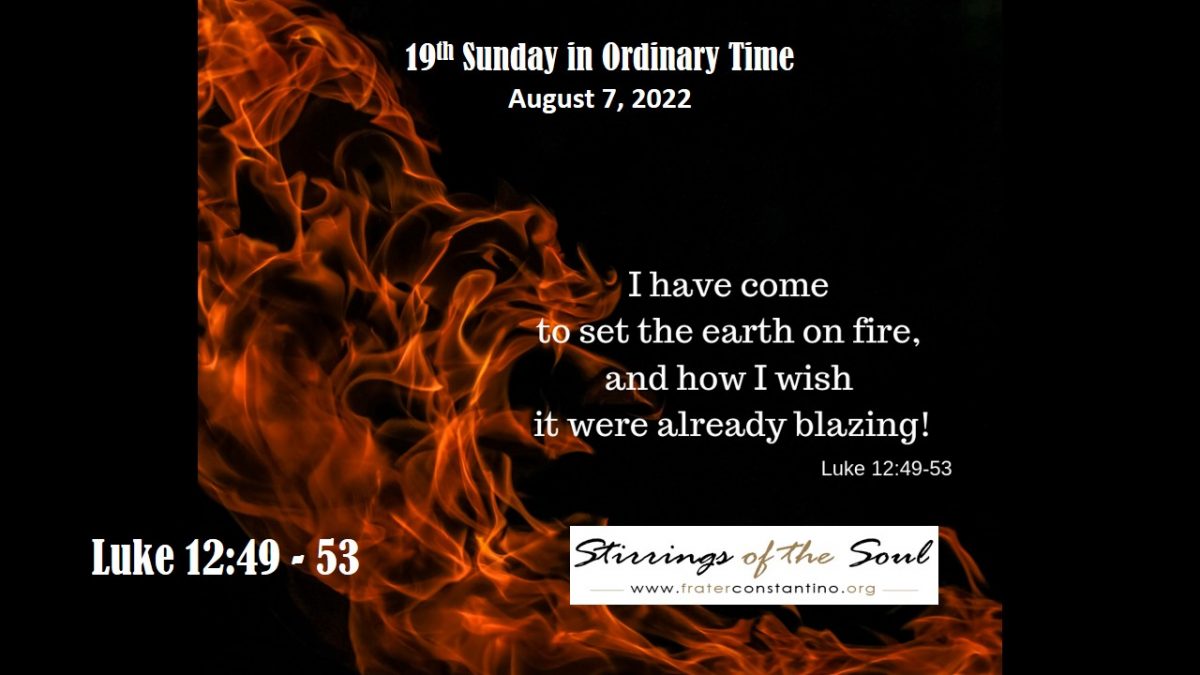 Note: Sorry folks! This is rather too late. We missed the renewal date of the website. My Apology.

A. Text/Context
• There is a shocking passage in the gospel today which we have just heard
• Jesus said: Do you think that I have come to establish peace on earth? No I tell you, I have come for division
• These words came from Jesus and from the lessons in Catechism, we all know that Jesus is a giver of peace
• Jesus is a man of peace, a king of peace, a savior who will eventually supplant everlasting peace when the fullness of the kingdom shall finally arrive
• This is the very nature of Jesus himself – a man of peace
• Now from the gospel today it says the opposite: He said to his disciples that I have not come for peace but rather division
• How can we reconcile and come to terms with these words when it is so un-Christian to establish division?
• To understand this, we need to know a little background. During our study in theology when we were still seminarians we learned that Jesus is a sign of contradiction
• How did it happen that Jesus is a sign of contradiction is what we will tackle this evening
• When we go back to the time when Jesus was presented in the temple, the prophet Simeon prophesied by saying: this child is set for the rise and the fall of many in Israel
• Jesus will contradict many in Israel and this is understood on one hand that Jesus will be the cause of salvation for the many who will believe in him
• And on the other hand, Jesus will also be the cause of the ruin and damnation of the many who are opposed to him, those who do not believe in him
• When Jesus arrived in the NT times, he preached and introduced to the people something very new and radical because his teachings contradict the prevailing practices of the people
• So, instead of killing your enemies Jesus teaches to love and forgive your enemies. That’s very difficult because the dictum in the OT is an eye for an eye, and a tooth for a tooth
• Instead of divorce Jesus even gives an expanded teaching of the law in divorce: even to look at a woman or a man with lust, that man or woman commits adultery
• Well, at least the sin of adultery is understood as the adultery in the mind as real adultery cannot take place without a partner
• Adultery, fornication are the only sins that cannot be committed alone as it takes two to tango
• Even in the NT times, if a member of the family gets farther from the mainstream society, culture, or even religion it could have fatal consequences
• The family will not only disown you, but even the whole clan or tribe. You could be excommunicated and you become an outcast
• If a member of a Jewish family marries a Samaritan or a Greek or a Roman or a non- Jew, then you are detached and becomes an outcast
• When Jesus began to preach in his public ministry many people became believers, but also at the same time many also do not believe
• And so Jesus is the dividing line. Jesus is the sign of division. Jesus is the point of contradiction
• It was very dangerous in those days to follow something new much less to break away from the mainstream religion. You can even get killed
• Remember the military crackdown in Jerusalem. After the death of Jesus the disciples have to hold secret meetings so as not to be identified as his followers because they can get arrested when discovered
• So it was in this context that families, tribes, clans were divided brought about by the presence of Jesus; to believe or not to believe
• To those who believed in Jesus, there is a sword ablaze in the family. Father against son, mother against daughter, brother against sister, etc. because of the choice that they have for Jesus
• Jesus is now telling his disciples to make a choice and you must stand and defend for the choice you make
• Stand and fight for what you believe. Jesus wants to set fire on the hearts of his disciples that they must become the agents of change

B. Human Situation
• The situation during the time of Jesus is no different with the situation of what we have today
• Our modern times is governed by many different principles and philosophies that shape the moral standards of today so we have to be very careful with what we adhere
• Human rights, personal rights, personal freedom, individual liberty are now the norms that take center stage
• And so with a backdrop of respect for individual rights and freedom, I now have a right to my own body and so I can do anything with my own body
• And what is the one fatal consequence of this? Pro-choice. Pro-choice has opened the gates of widespread abortion especially in the West
• It is now very obvious that a sharp division now exists between pro-choice and pro-life
• That such division exists because we put so much attention on the rights of an individual, we give so much emphasis on personal freedom. This is humanism the bad side of it
• My brothers and sisters, we need to be reminded of this: While it may seem charitable, to be seen to care about the needs of the poor people, you can never substitute God, by placing the needs of man first before God
• Look behind the mask of humanism and all those principles of freedom and you will not find signs of God, nor will you hear the name of God mentioned
• Humanism, while having all the exterior signs of love for God appears very Christian, but it is not what it seems. Behind the beautiful mask of charity, humanism only basks with selfishness and self-centered love
• If we only believe that all that matters is the wellbeing of a person albeit in the form of worldly things, under the face of humanitarian care and charity, and we forget God, then, we are in the wrong track

C. Challenge
• And so we are challenged by the gospel today that our choice is only for God and only for what God has mandated us to do
• There is no tolerance for abortion under the guise of respect for the rights of a woman to her own body
• There is no same sex marriage under the guise of their choice of what gender they have chosen
• There is no cover up that we do not tell the truth under the guise of political correctness
• Here we are my brothers and sisters. Only for God. And sad to say that there is no middle ground.
• We uphold the laws of God, even if we stand in the lonely path of an opposition
• We adhere to the laws of God, even if we become a sign of contradiction